The capacitor is a component which has the ability or “capacity” to store energy in the form of an electrical charge producing a potential difference (Static Voltage) across its plates, much like a small rechargeable battery.

There are many different kinds of capacitors available from very small capacitor beads used in resonance circuits to large power factor correction capacitors, but they all do the same thing, they store charge.

In its basic form, a capacitor consists of two or more parallel conductive (metal) plates which are not connected or touching each other, but are electrically separated either by air or by some form of a good insulating material such as waxed paper, mica, ceramic, plastic or some form of a liquid gel as used in electrolytic capacitors. The insulating layer between a capacitors plates is commonly called the Dielectric.

Due to this insulating layer, DC current can not flow through the capacitor as it blocks it allowing instead a voltage to be present across the plates in the form of an electrical charge.

The conductive metal plates of a capacitor can be either square, circular or rectangular, or they can be of a cylindrical or spherical shape with the general shape, size and construction of a parallel plate capacitor depending on its application and voltage rating.

There are two types of electrical charge, positive charge in the form of Protons and negative charge in the form of Electrons. When a DC voltage is placed across a capacitor, the positive (+ve) charge quickly accumulates on one plate while a corresponding and opposite negative (-ve) charge accumulates on the other plate. For every particle of +ve charge that arrives at one plate a charge of the same sign will depart from the -ve plate.

Then the plates remain charge neutral and a potential difference due to this charge is established between the two plates. Once the capacitor reaches its steady state condition,an electrical current is unable to flow through the capacitor itself and around the circuit due to the insulating properties of the dielectric used to separate the plates.

The flow of electrons onto the plates is known as the capacitors Charging Current which continues to flow until the voltage across both plates (and hence the capacitor) is equal to the applied voltage Vc. At this point the capacitor is said to be “fully charged” with electrons.

The strength or rate of this charging current is at its maximum value when the plates are fully discharged (initial condition) and slowly reduces in value to zero as the plates charge up to a potential difference across the capacitors plates equal to the source voltage.

The amount of potential difference present across the capacitor depends upon how much charge was deposited onto the plates by the work being done by the source voltage and also by how much capacitance the capacitor has and this is illustrated below. 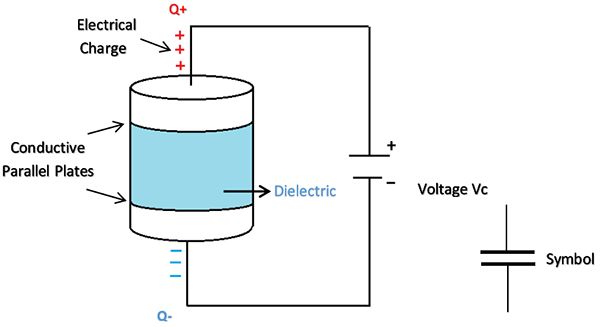 The parallel plate capacitor is the simplest form of capacitor. It can be constructed using two metal or metallised foil plates at a distance parallel to each other, with its capacitance value in Farads, being fixed by the surface area of the conductive plates and the distance of separation between them. Altering any two of these values alters the the value of its capacitance and this forms the basis of operation of the variable capacitors.

Also, because capacitors store the energy of the electrons in the form of an electrical charge on the plates the larger the plates and/or smaller their separation the greater will be the charge that the capacitor holds for any given voltage across its plates. In other words, larger plates, smaller distance, more capacitance.

Although we have said that the charge is stored on the plates of a capacitor, it is more exact to say that the energy within the charge is stored in an “electrostatic field” between the two plates. When an electric current flows into the capacitor, it charges up, so the electrostatic field becomes much stronger as it stores more energy between the plates.

Likewise, as the current flowing out of the capacitor, discharging it, the potential difference between the two plates decreases and the electrostatic field decreases as the energy moves out of the plates.

The Dielectric of a Capacitor

As well as the overall size of the conductive plates and their distance or spacing apart from each other, another factor which affects the overall capacitance of the device is the type of dielectric material being used. In other words the “Permittivity” (ε) of the dielectric.

The conductive plates of a capacitor are generally made of a metal foil or a metal film allowing for the flow of electrons and charge, but the dielectric material used is always an insulator. The various insulating materials used as the dielectric in a capacitor differ in their ability to block or pass an electrical charge.

This dielectric material can be made from a number of insulating materials or combinations of these materials with the most common types used being: air, paper, polyester, polypropylene, Mylar, ceramic, glass, oil, or a variety of other materials.

The Capacitance of a Capacitor

Capacitance is the electrical property of a capacitor and is the measure of a capacitors ability to store an electrical charge onto its two plates with the unit of capacitance being the Farad (abbreviated to F) named after the British physicist Michael Faraday.

Capacitance is defined as being that a capacitor has the capacitance of One Farad when a charge of One Coulomb is stored on the plates by a voltage of One volt. Note that capacitance, C is always positive in value and has no negative units. However, the Farad is a very large unit of measurement to use on its own so sub-multiples of the Farad are generally used such as micro-farads, nano-farads and pico-farads, for example.

Then using the information above we can construct a simple table to help us convert between pico-Farad (pF), to nano-Farad (nF), to micro-Farad (μF) and to Farads (F) as shown.

Voltage Rating of a Capacitor

If the voltage applied across the capacitor becomes too great, the dielectric will break down (known as electrical breakdown) and arcing will occur between the capacitor plates resulting in a short-circuit. The working voltage of the capacitor depends on the type of dielectric material being used and its thickness.

Another factor which affects the operation of a capacitor is Dielectric Leakage. Dielectric leakage occurs in a capacitor as the result of an unwanted leakage current which flows through the dielectric material.

Generally, it is assumed that the resistance of the dielectric is extremely high and a good insulator blocking the flow of DC current through the capacitor (as in a perfect capacitor) from one plate to the other.

Basic Notes for Application of Capacitors

a. Rated voltage and working voltage